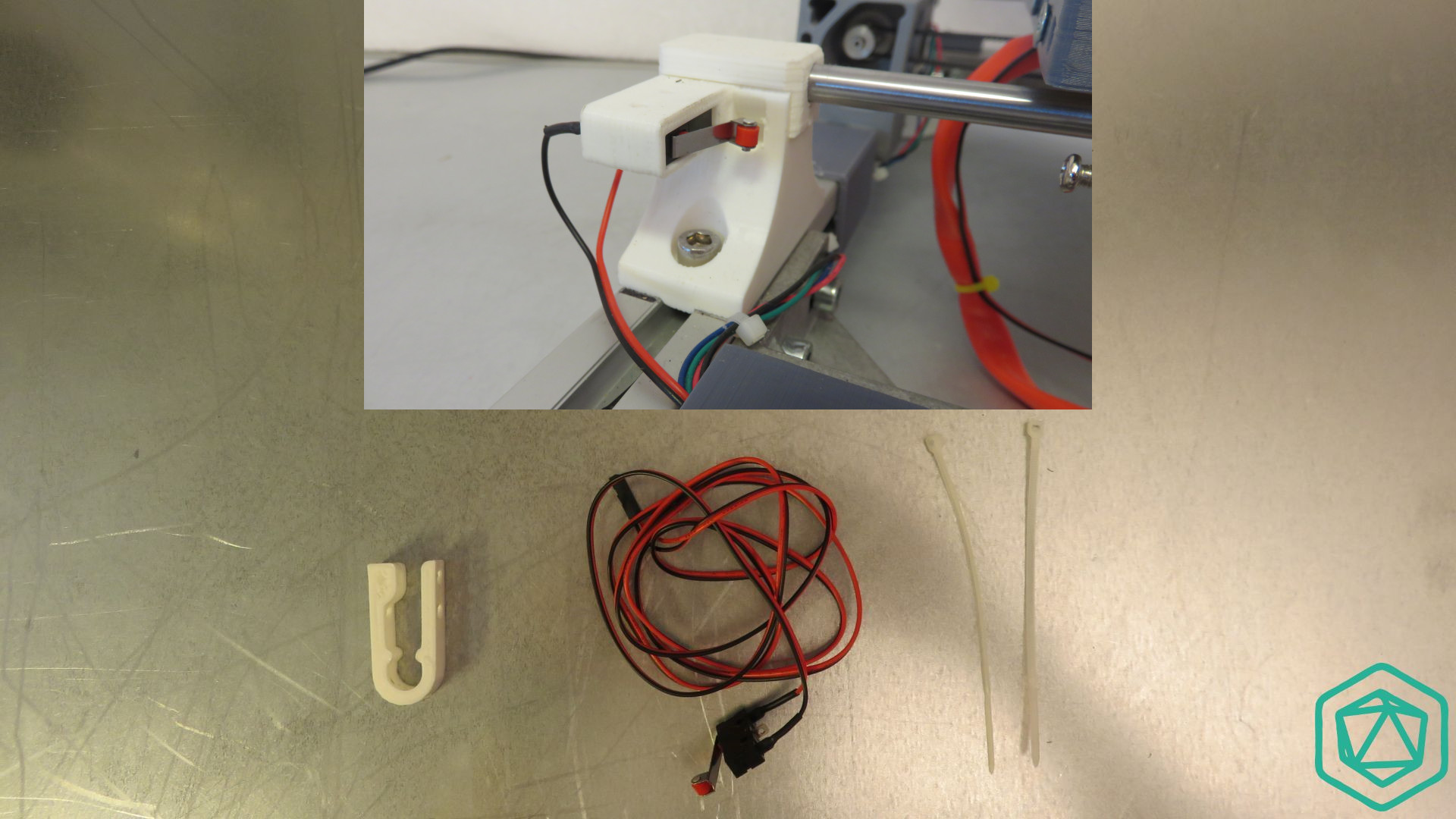 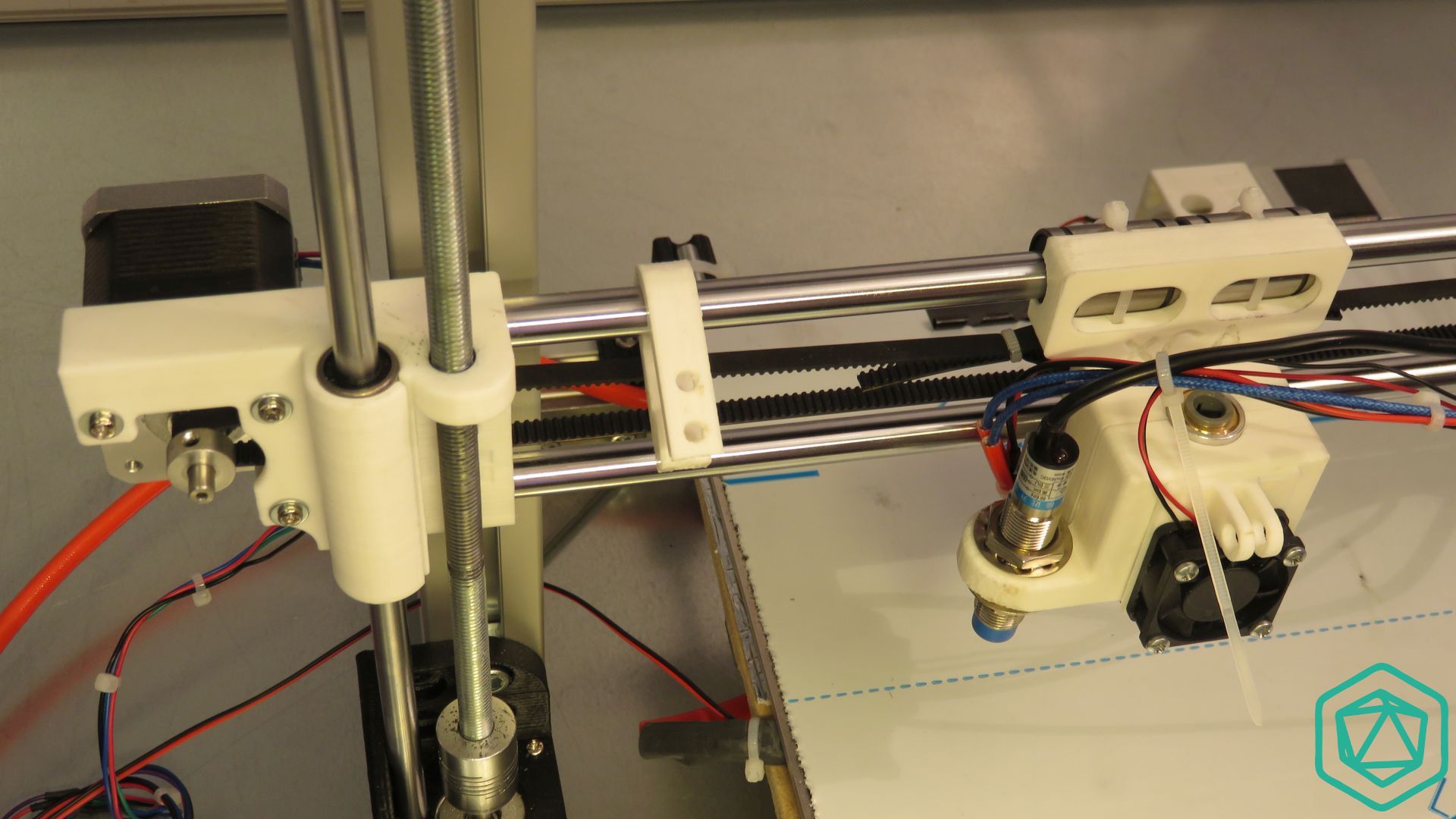 Take the plastic part looking like a hook and clips it over the smooth rod near the X axis motor support .

Here we placed it on the top rod, but you can place it on the bottom one if you feel the end stop doesn’t hit the X carriage 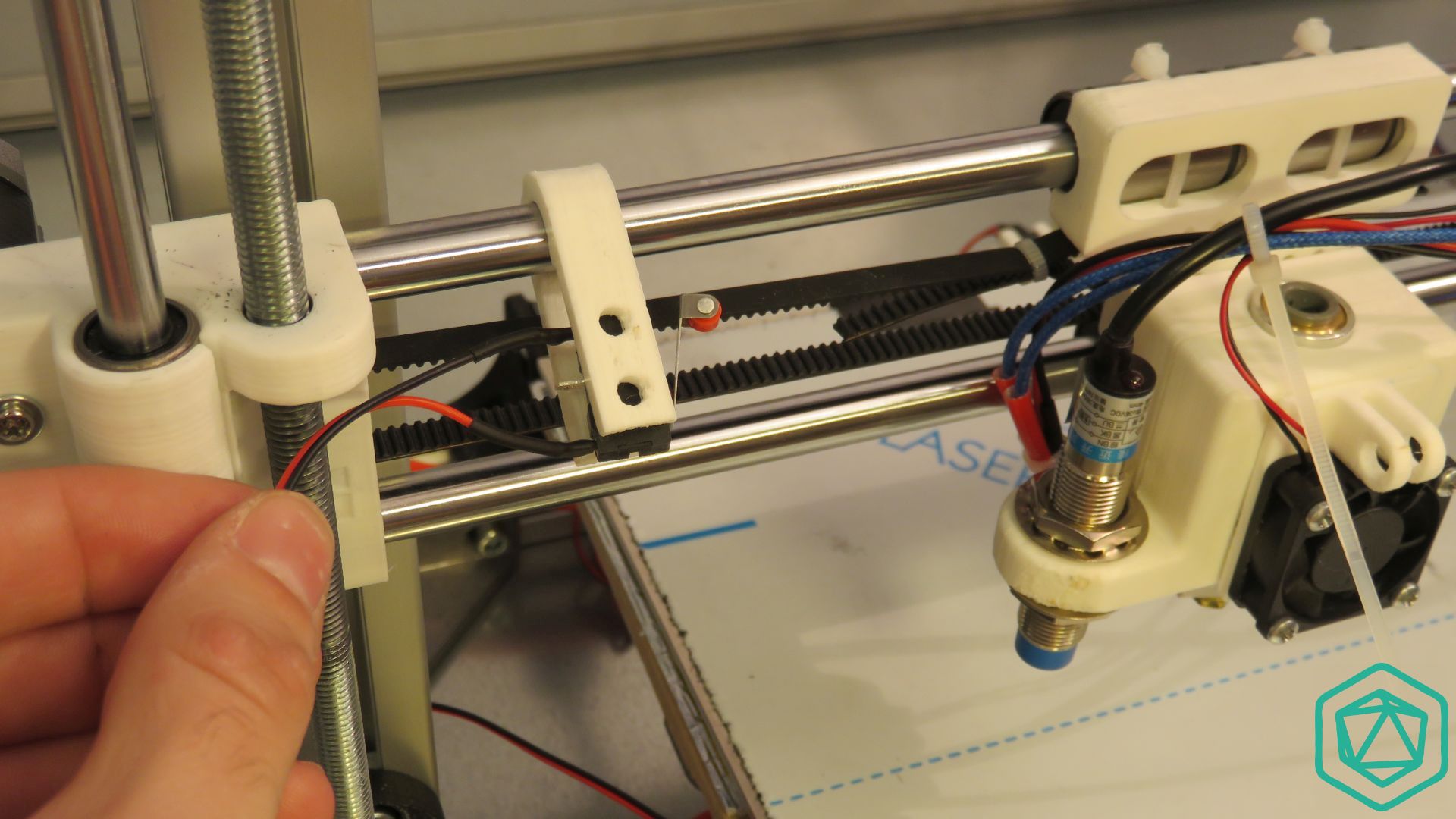 Now take the end stop with the wheel and place it so that the wires are on the outside of the machine toward the stepper motor, and make sure that the wheel is heading toward the smooth rod.

The main prupose here is that the wheel would hit the X carriage to signal to the electronic that the carriage has reached the MIN position on X axis. 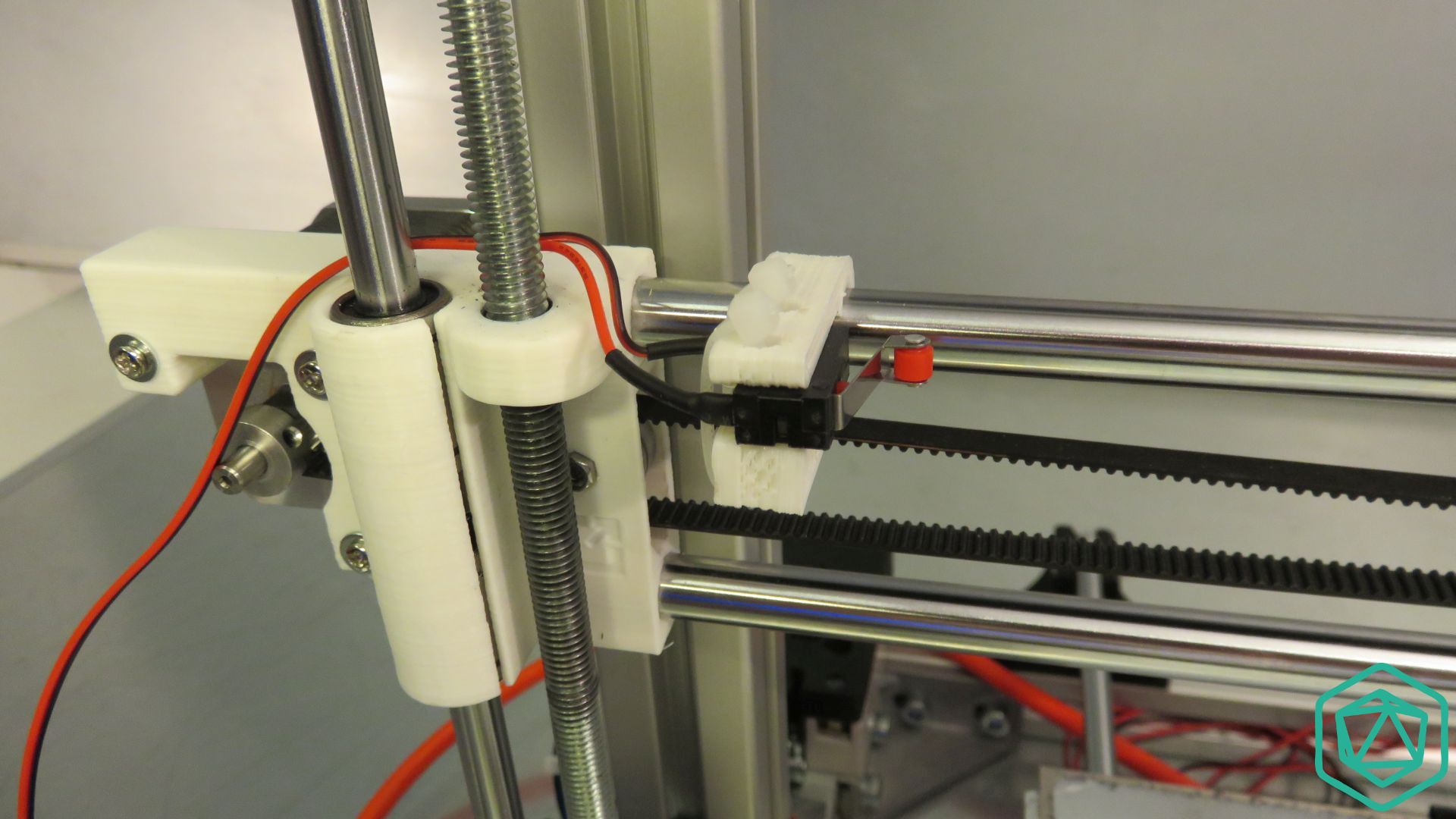 In order to allow the more natural position of the end stop’s wire, just make sure they go behind the threaded rod, between the threaded rod and the aluminum extrusion as shown on the picture. 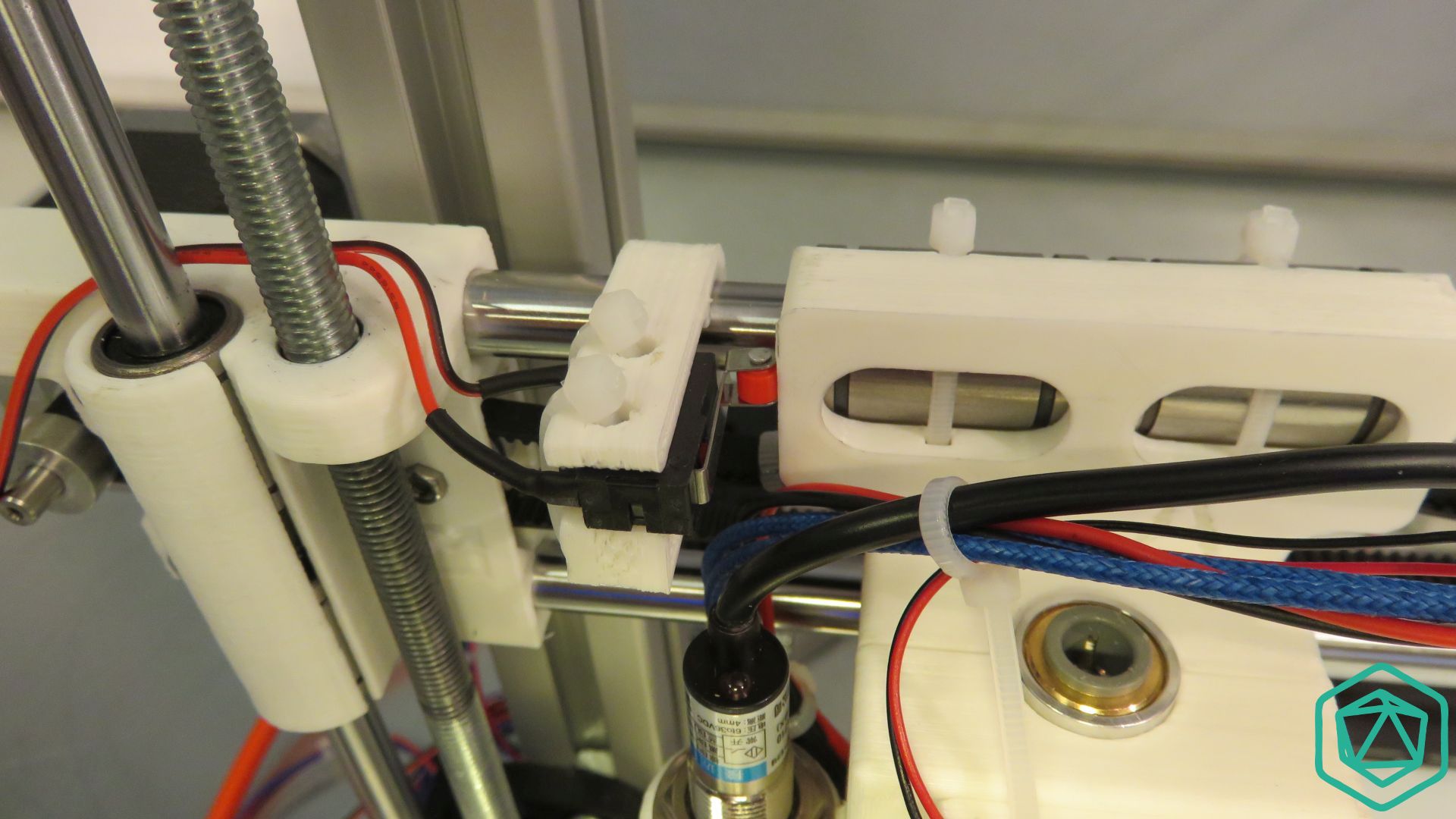 Bring the X axis carriage against the end stop and check that the wheel is properly pushed by the carriage and that the probe wire is well positioned.

If the probe wire is causing trouble, you might consider placing this end stop on the bottom smooth rod.

Also check that the end stop support is  not moving on the smooth rod to avoid possible future issues. 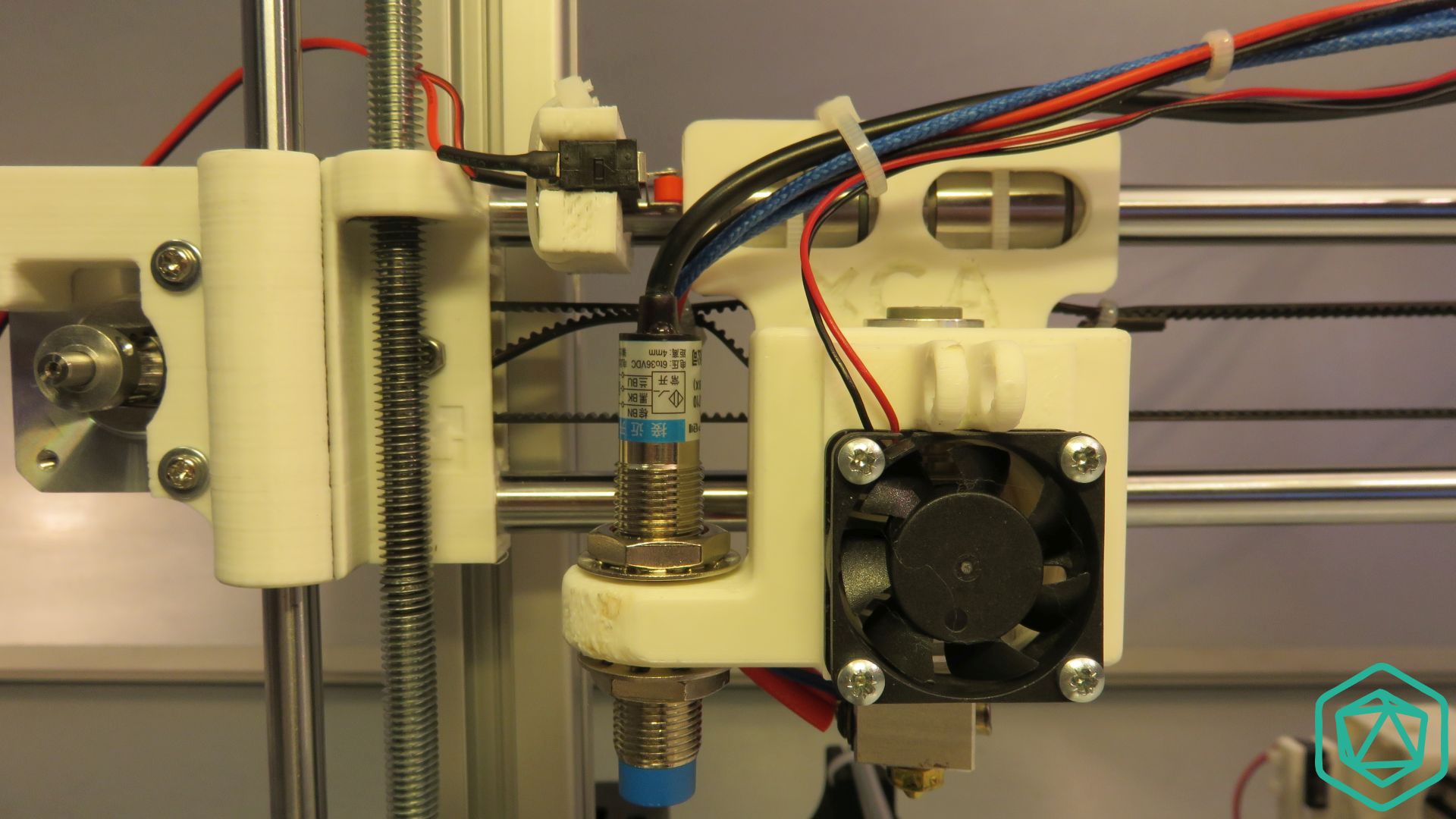 This picture shows the front view. The end stop is pushed against the x Carriage.

At this moment check that the nozzle position over the heat bed is reaching the border of it. If it’s not the case, just readjust the location of the end stop a little bit in order to achieve this goal. 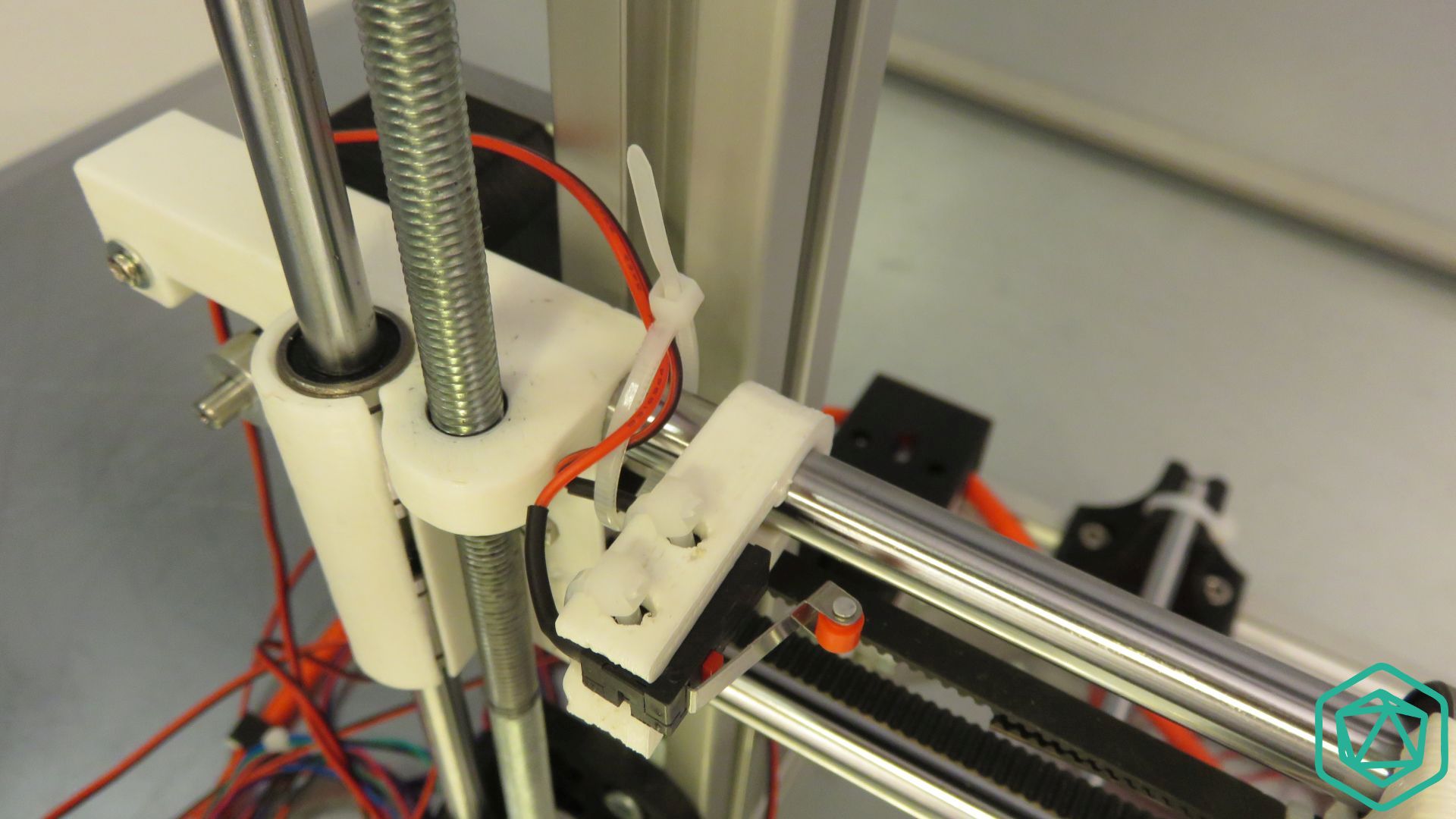 In order to make sure tat the end stop is properly attached to the smooth rod, you can constraint it using the cable tie and secure the end stop lead wire with it as on the picture making sure it’s going behind the threaded rod. 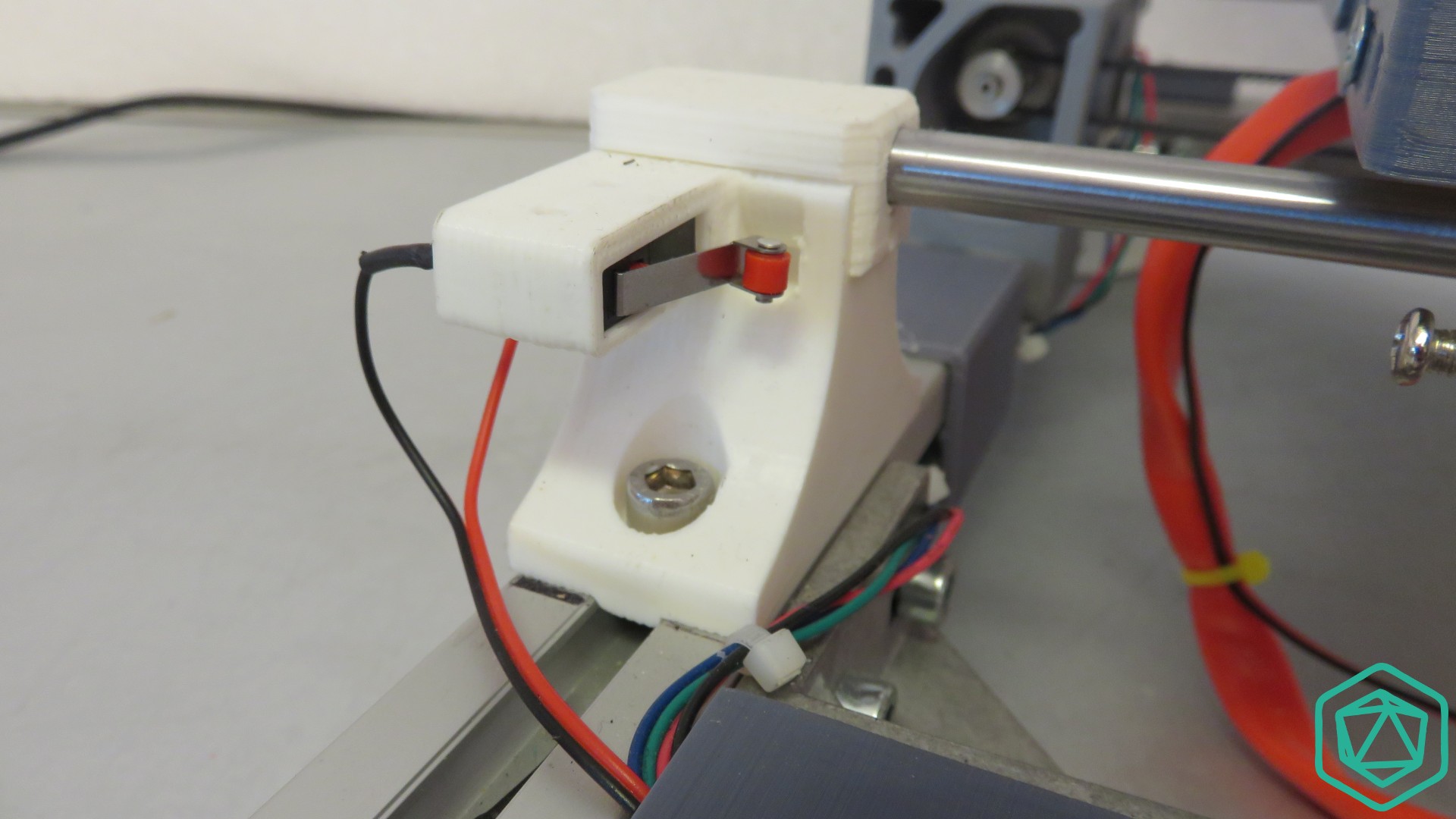 We are going to install here the end stop of the Y axis .

This items should already be assembled . You might need to remove the protective scotch however before using it.

You should have on your chassis 3 identical heatbed smooth rod supports and 1 other with the integrated end stop holder. 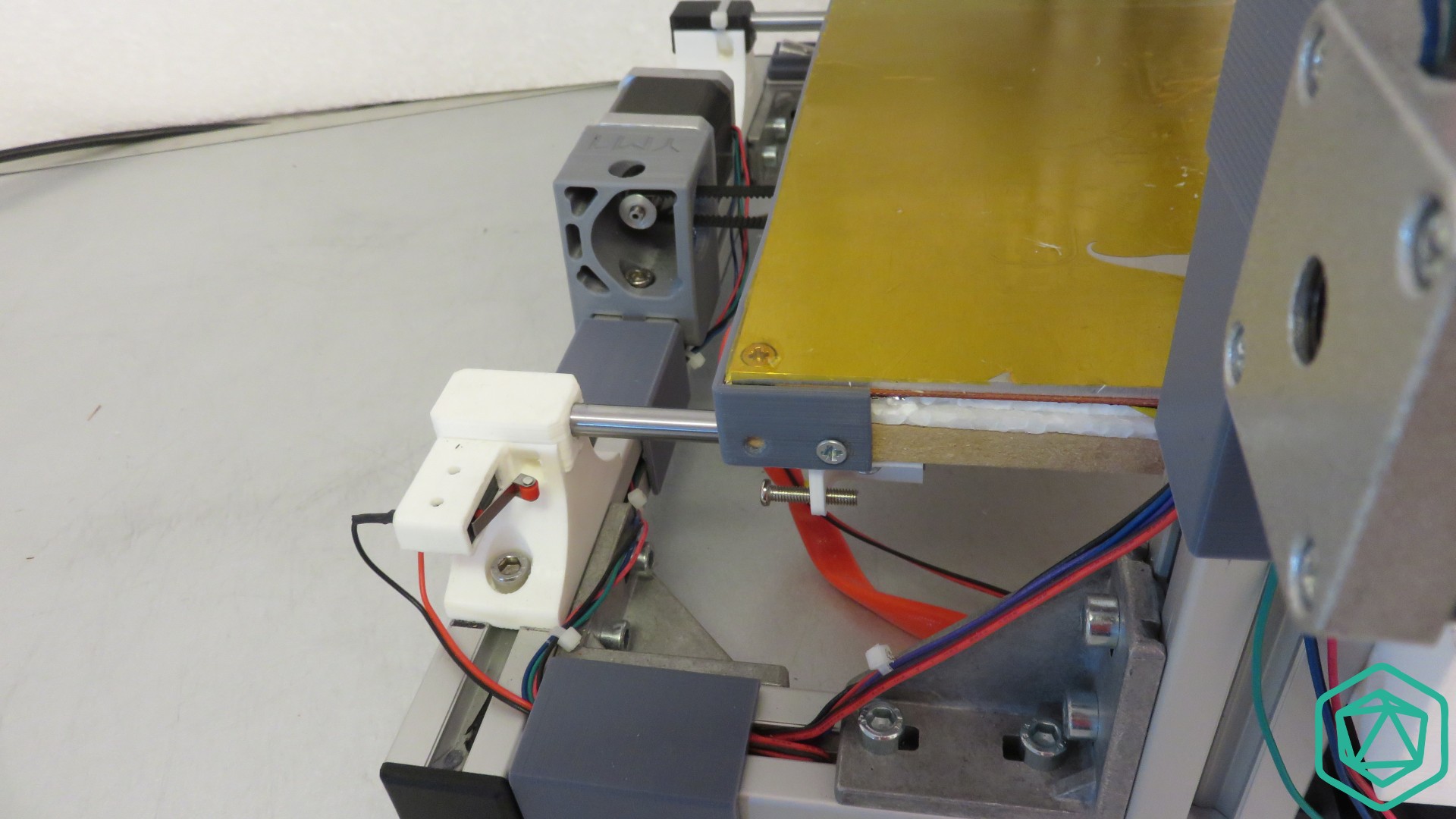 These 2 pictures should help you to locate the proper position of it.on your machine. 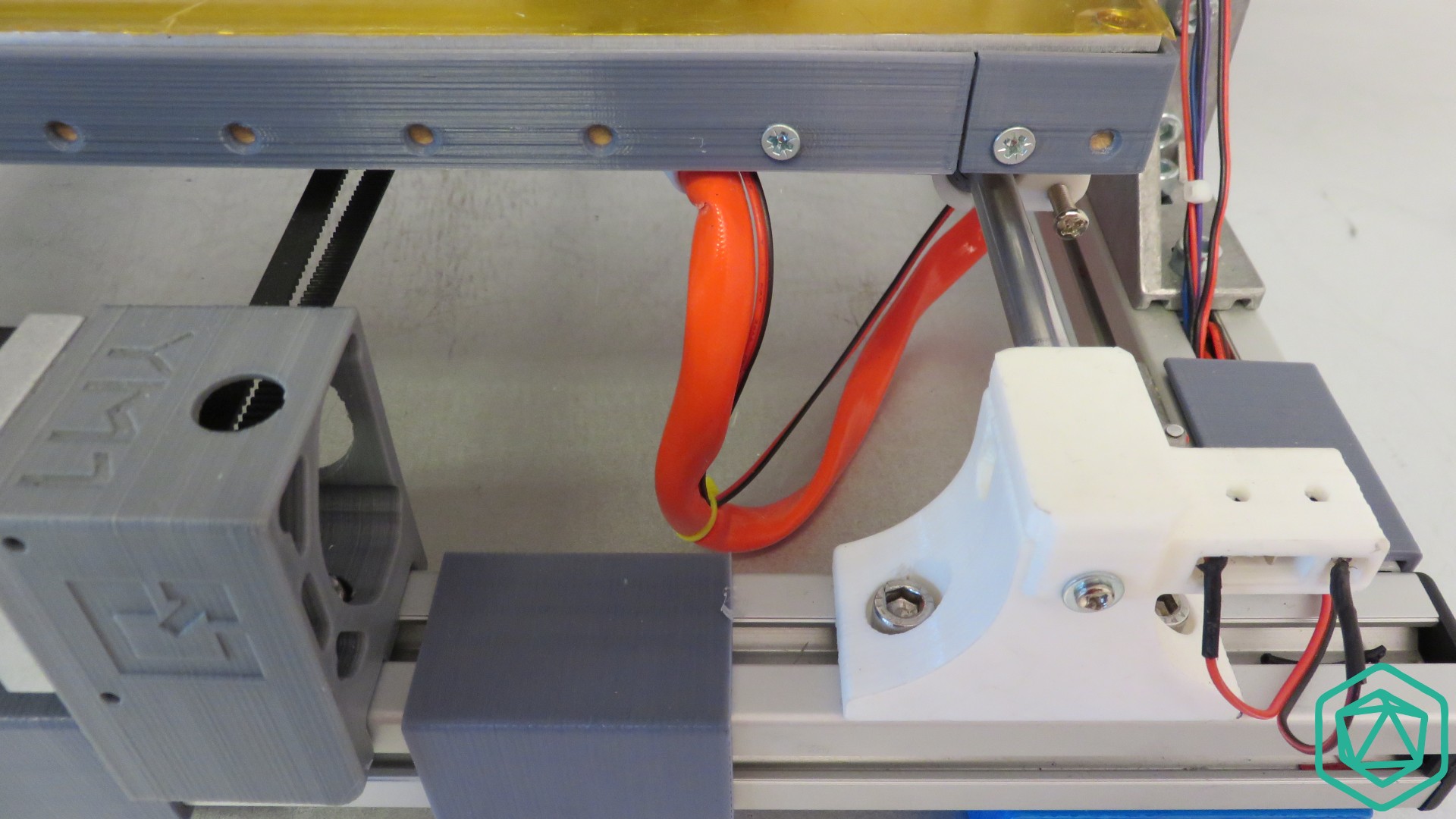 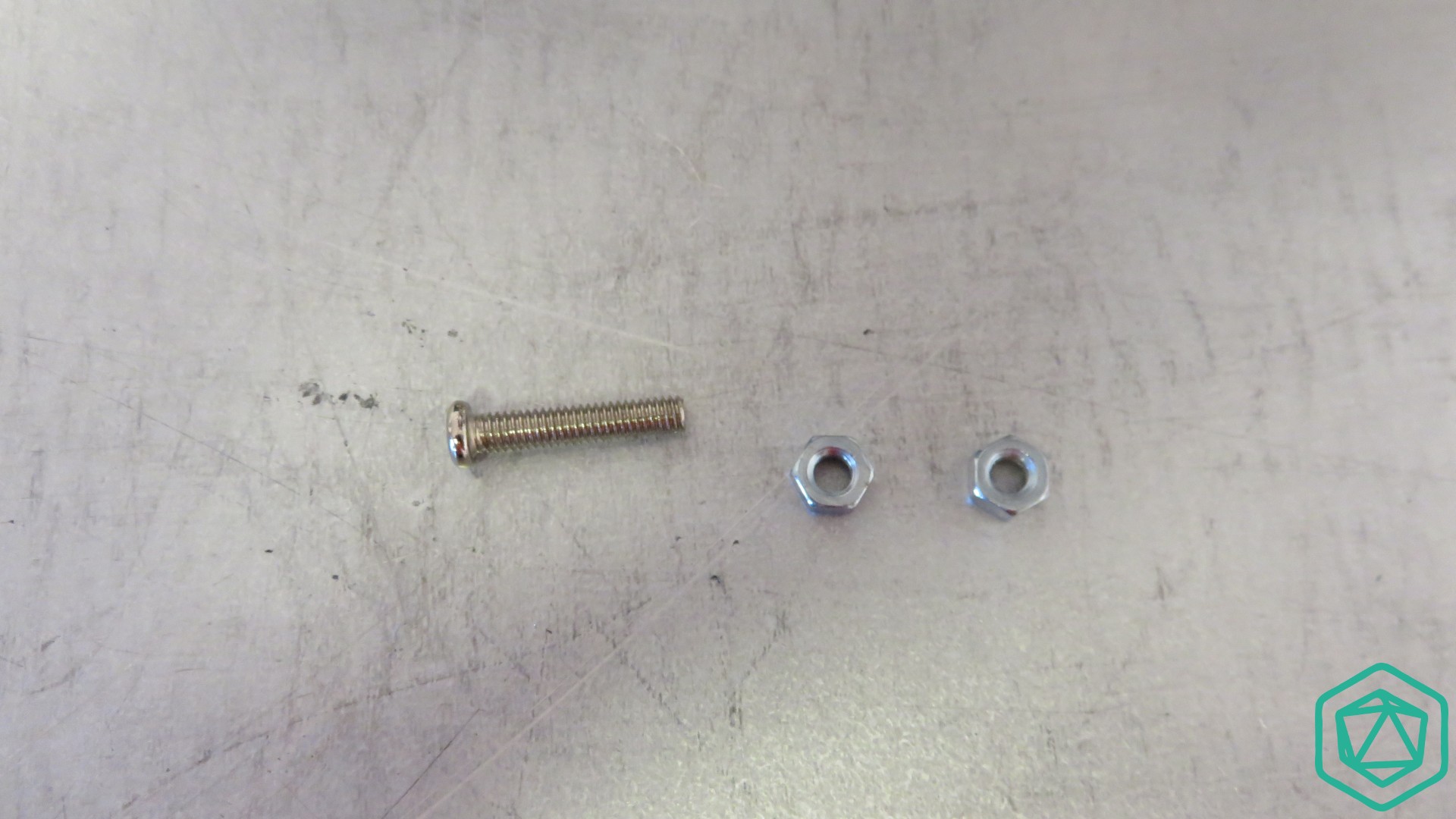 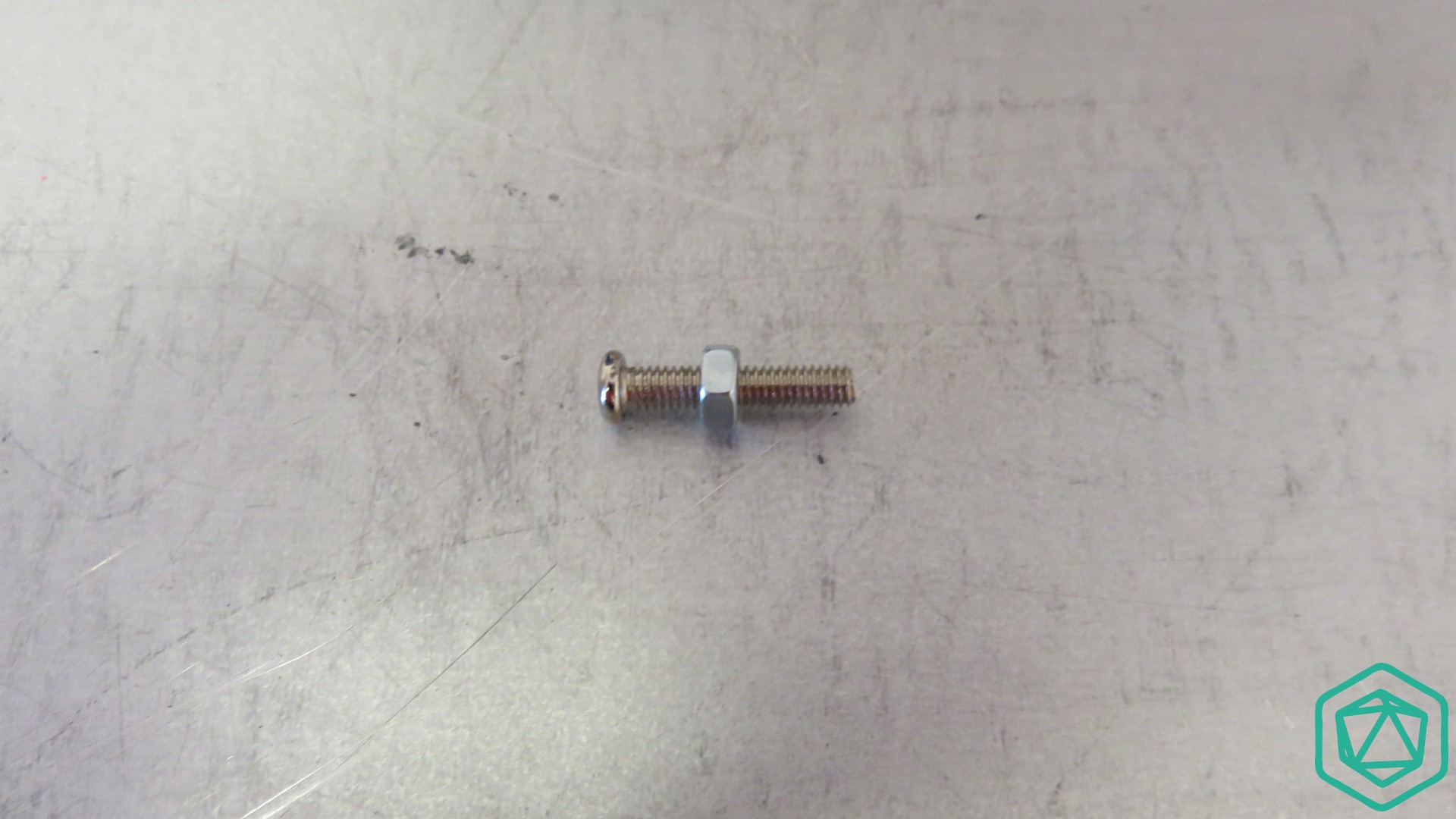 Place the nut at the middle of the screw thread. 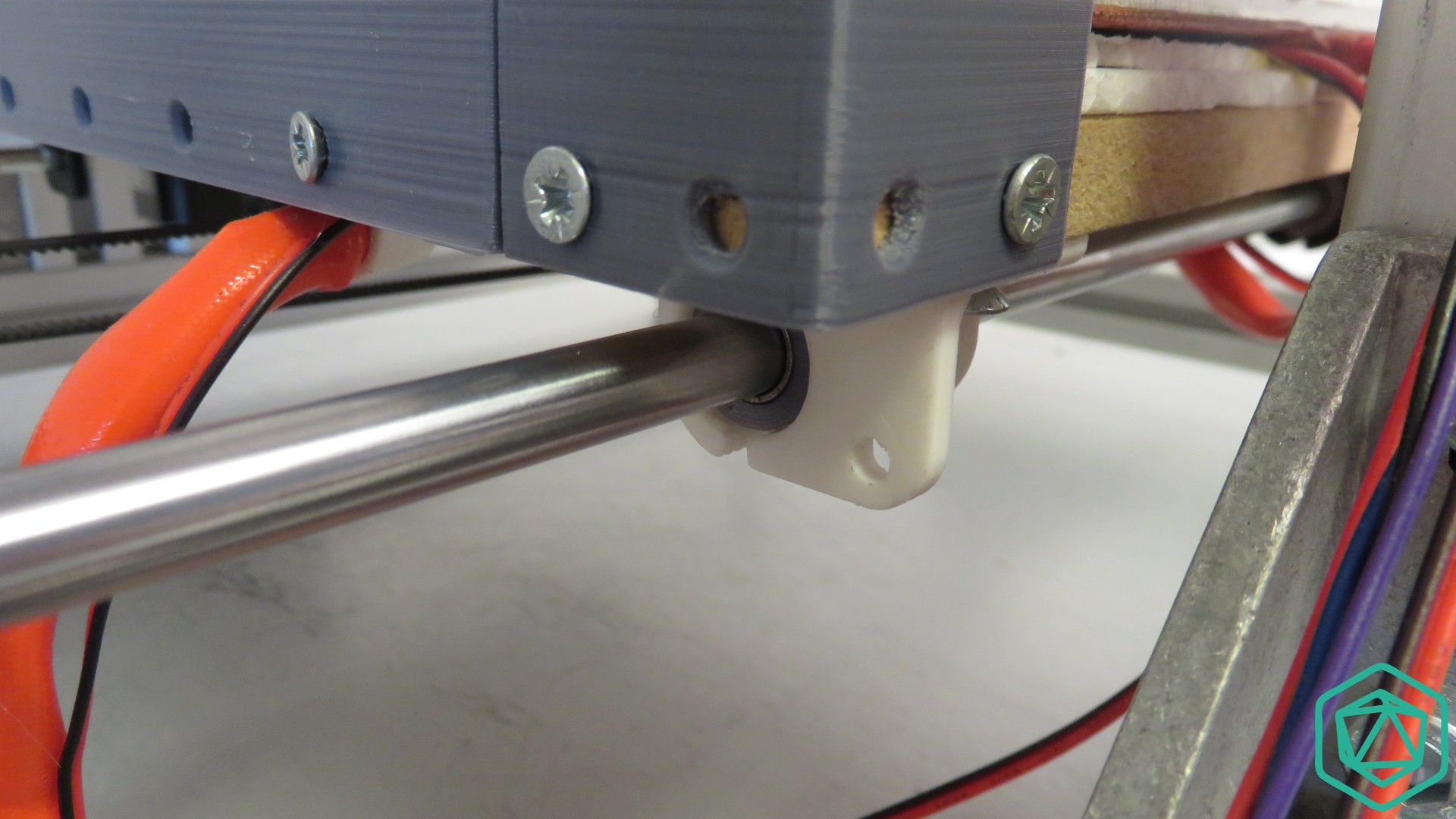 Under the heatbed, you should have a special LM8UU linear bearing holder with a hole dedicated to this screw . 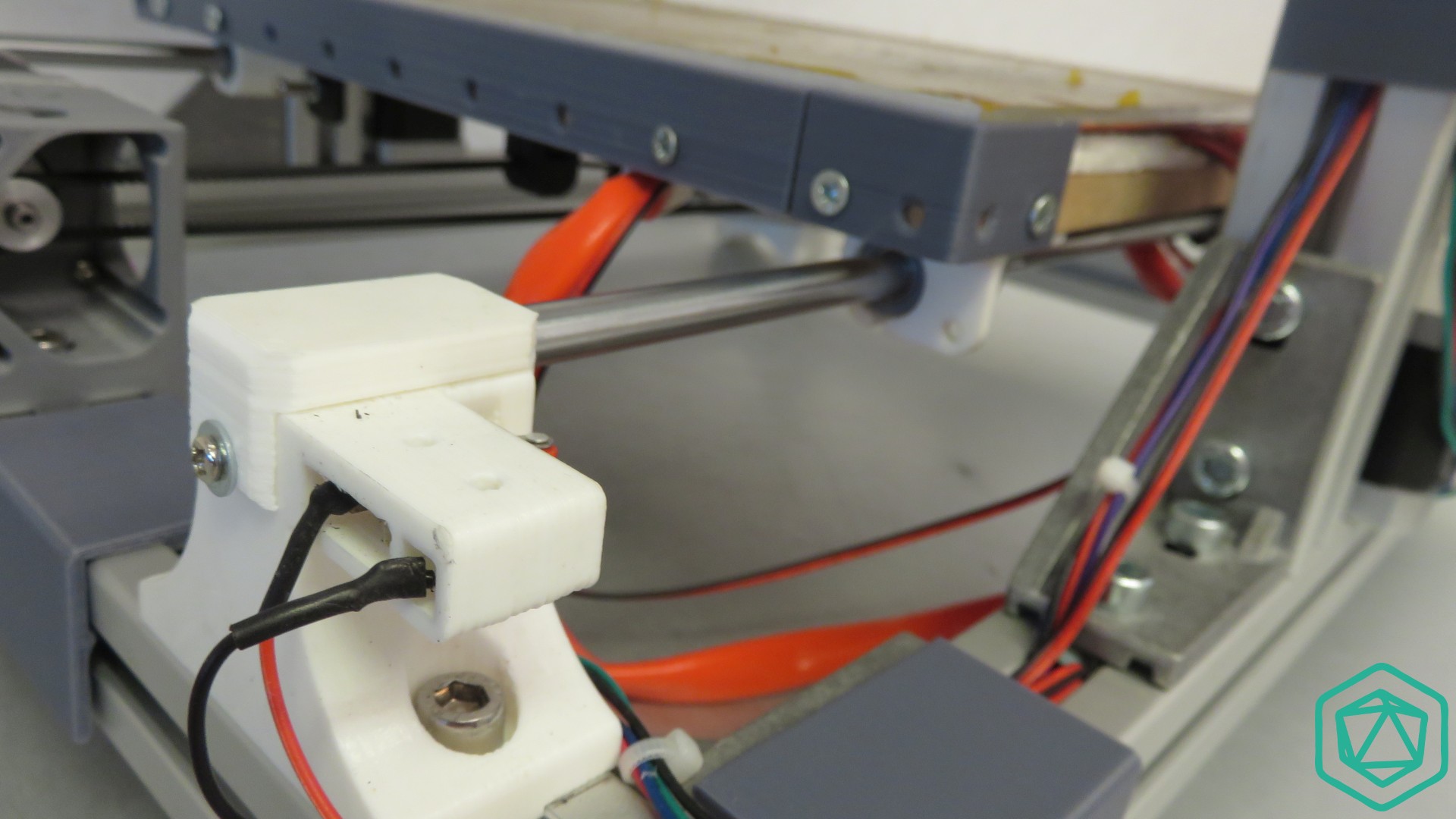 You should have this support aligned with the end stop holder. 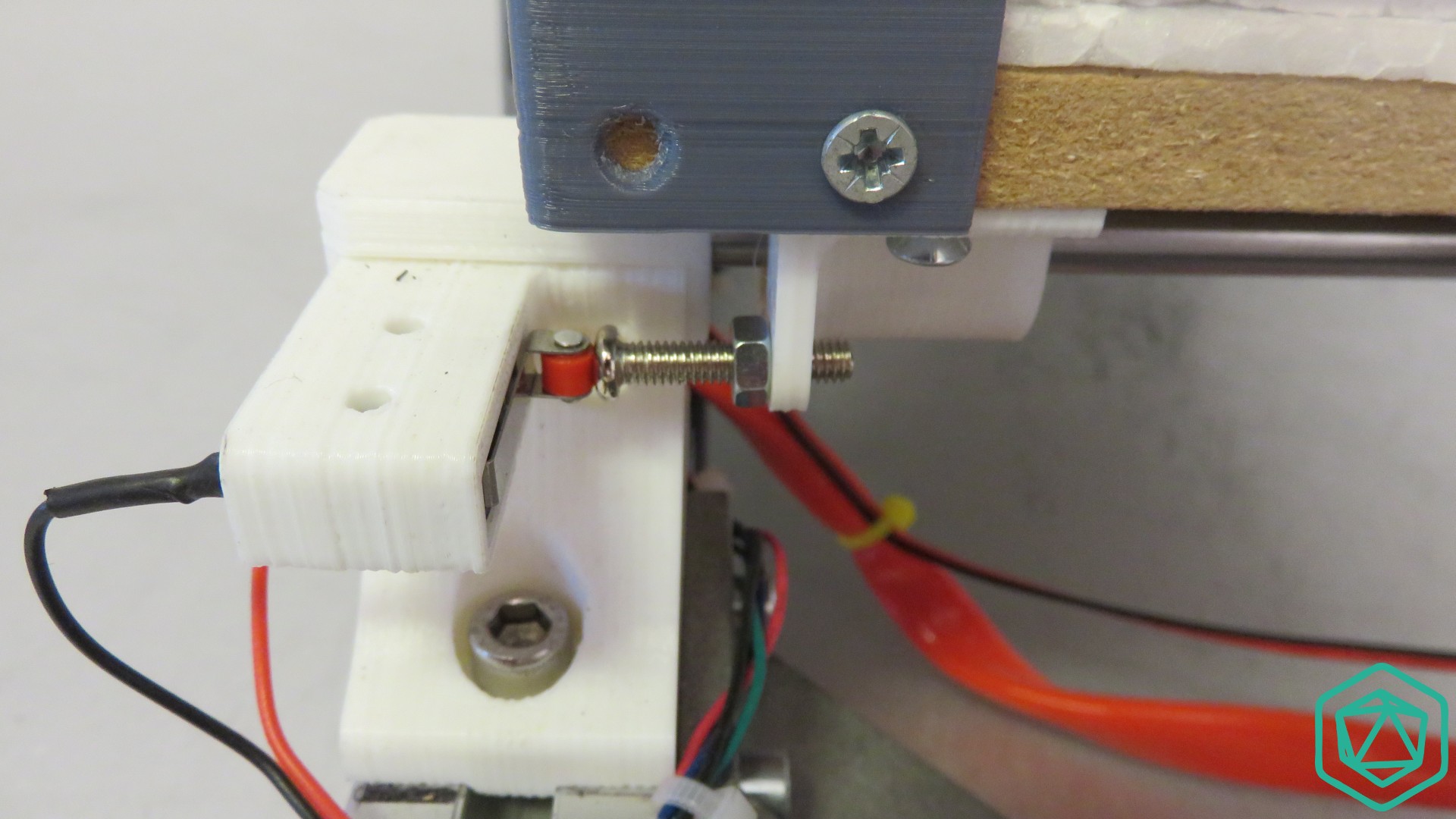 Now insert the screw inside up to the nut 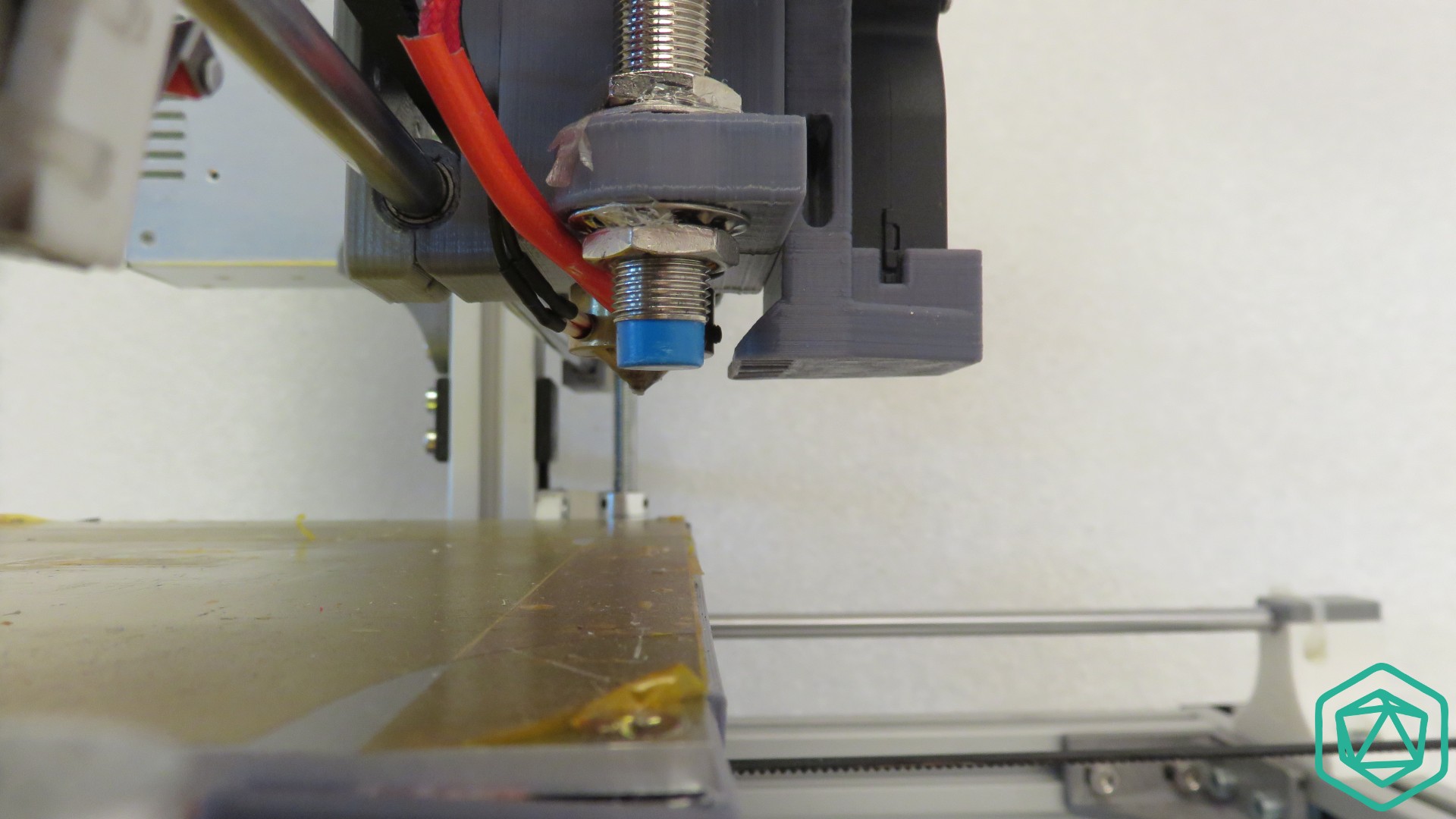 Adjust the screw depth so that the nozzle tip reach the edge of the heat bed. 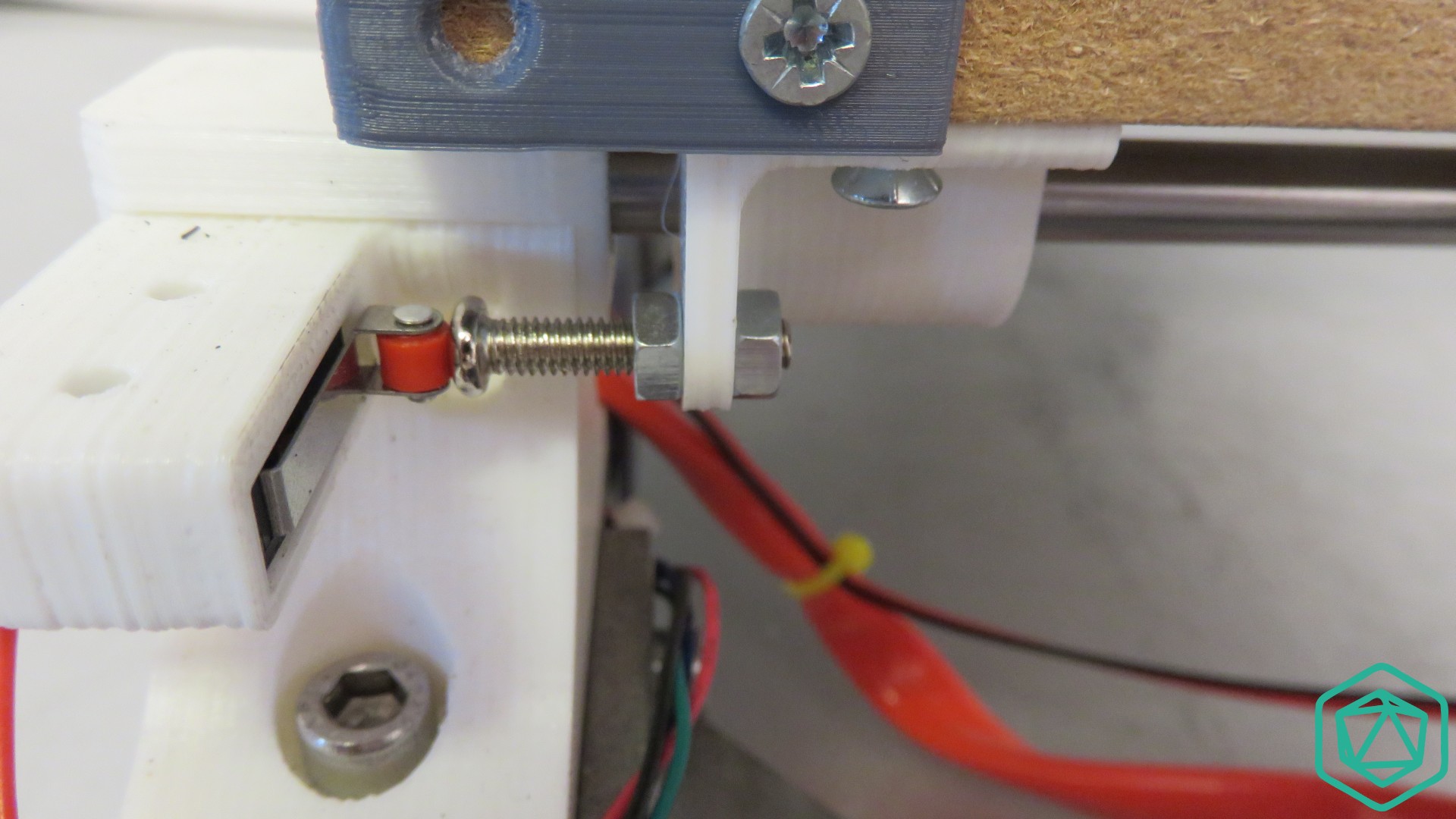 Secure the Screw using the left over M4 nut.

Now you are going to assemble the Y axis end stop.

Take the plastic support that is compatible with 30×30 slots.

The photo shows you how to place it. 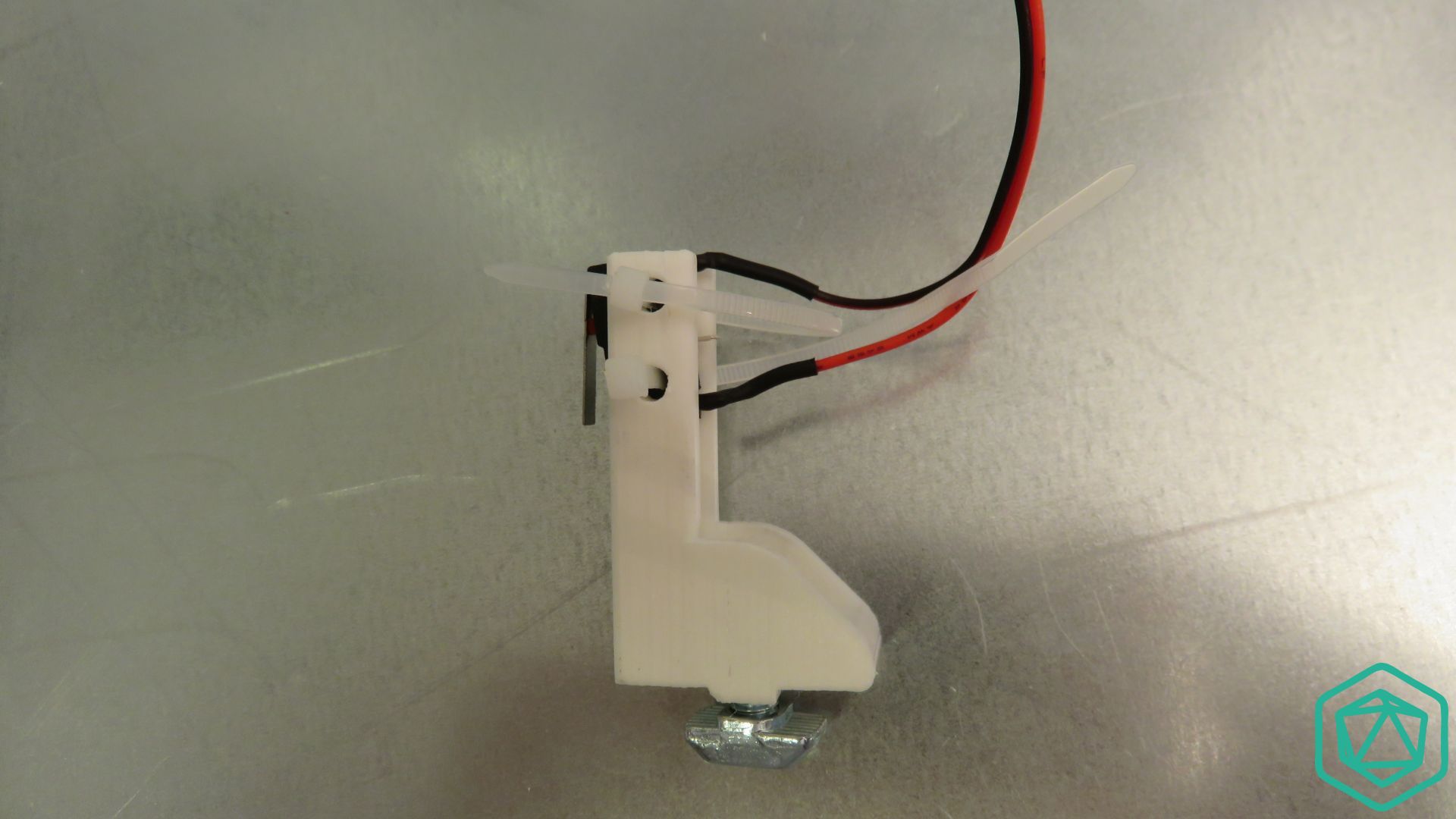 A good tip is to make sure that the cable ties heads are placed on the left of the plastic part. The picture should help you to place them properly. 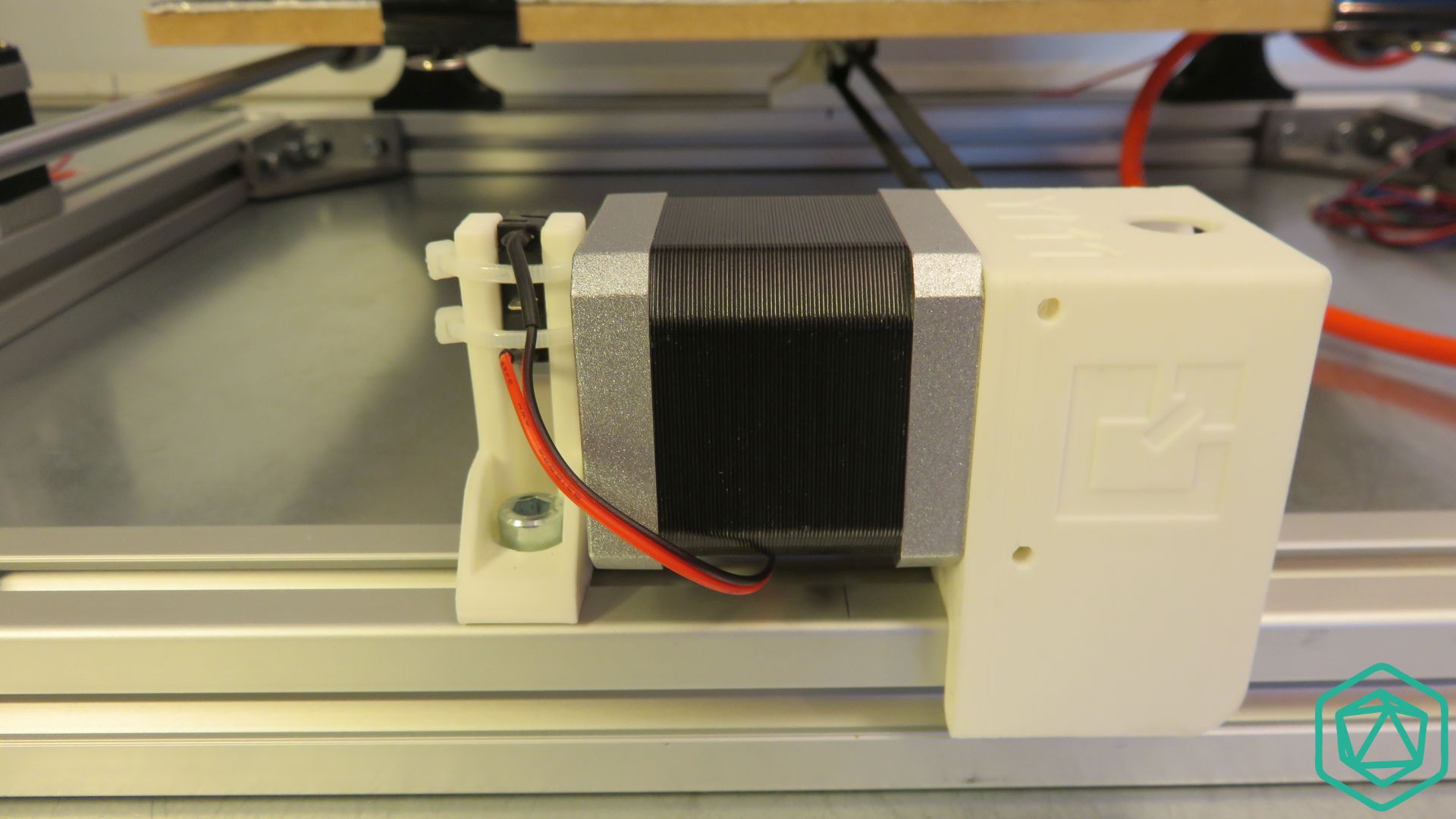 Place the whole assembly on the side of the Y axis motor near the YMI marked plastic part.

The lead wire of the end stop can be placed like on the picture, afterward the motor wires and the end stop wires will follow the some path. 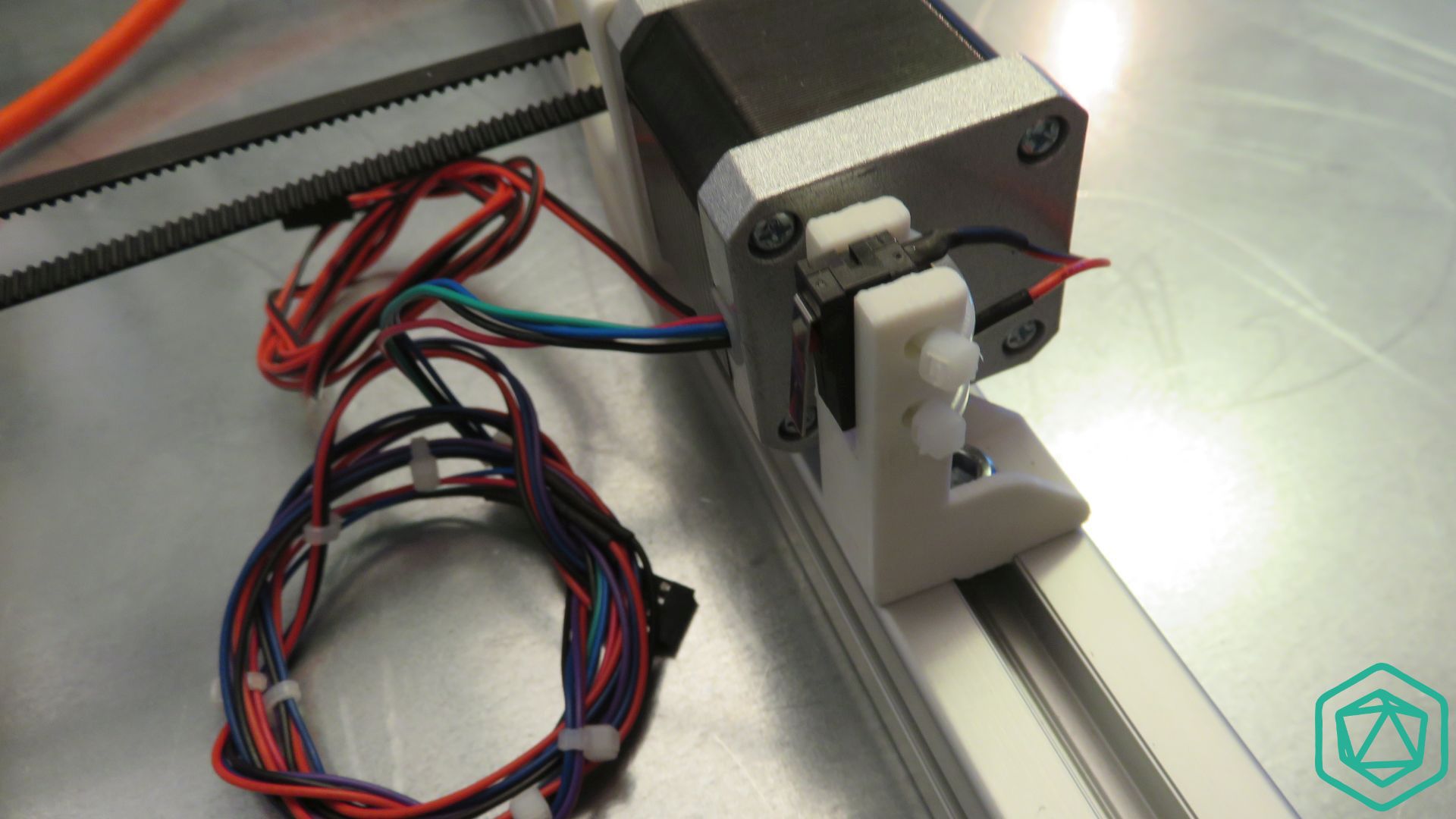 The inverted view shows how the end stop contact is located and how the wires are going to be placed.

This position is also nice to protect the contact metallic plate from being broken. 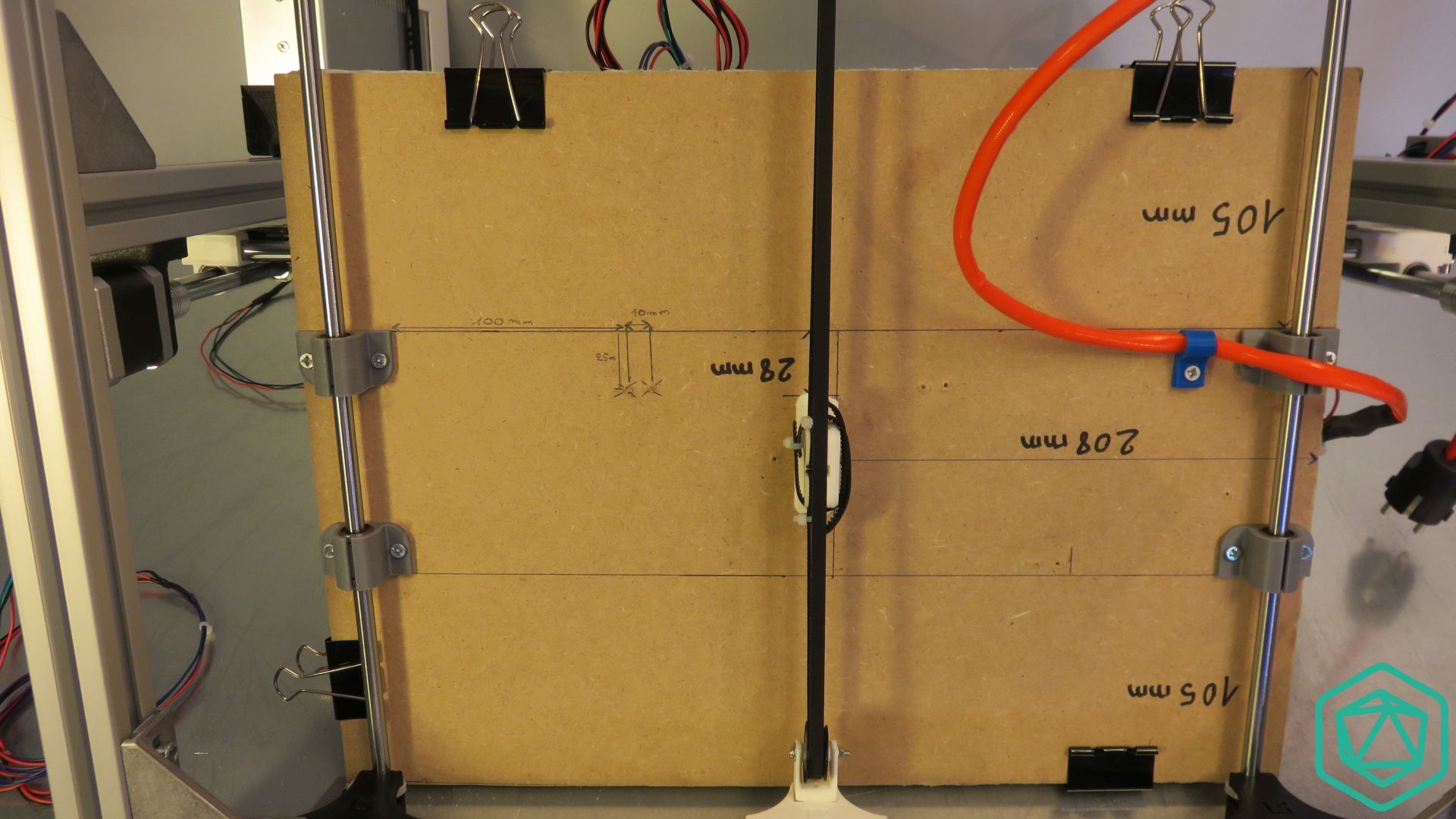 On this photo the Top left linear bearing support 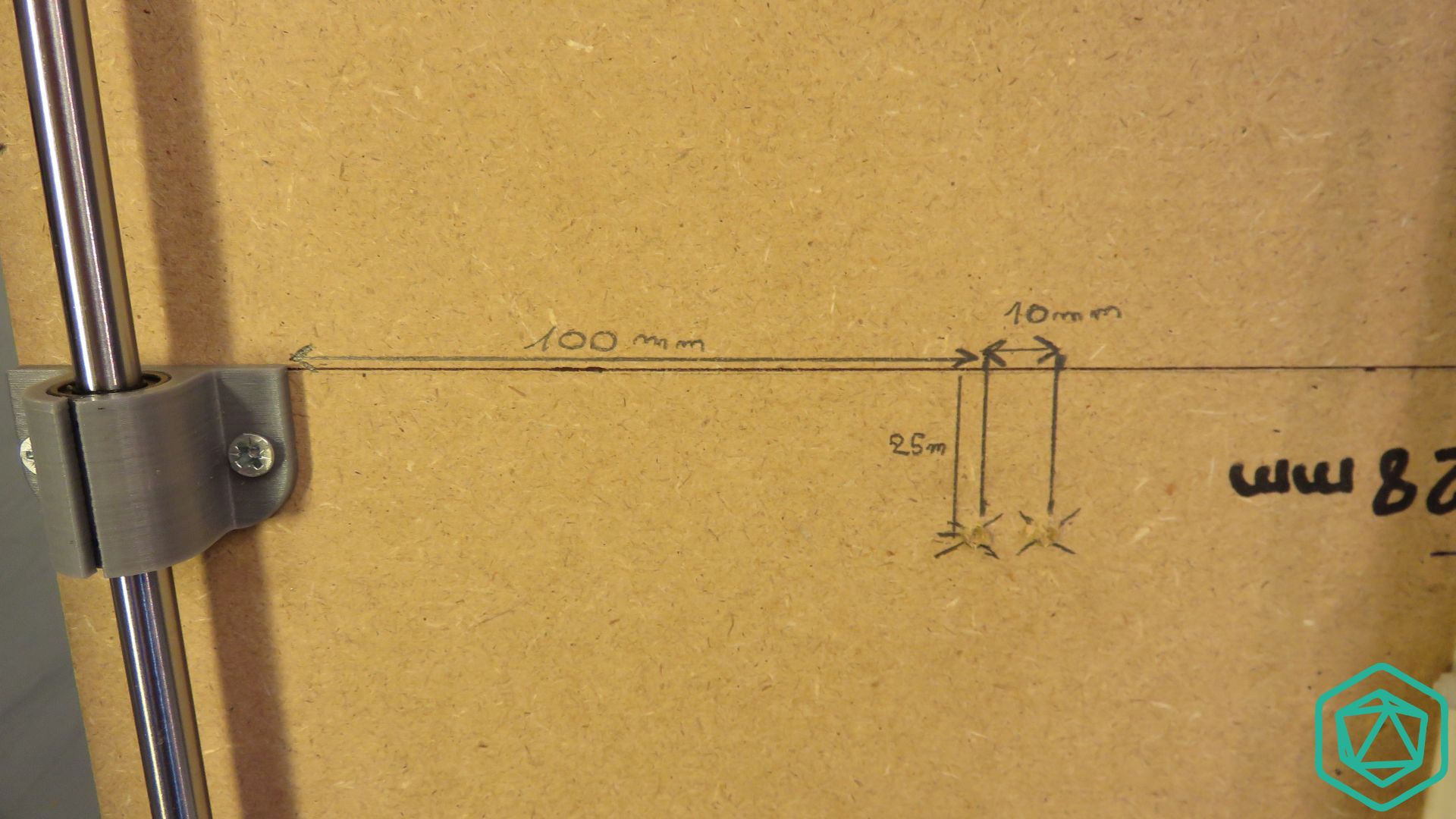 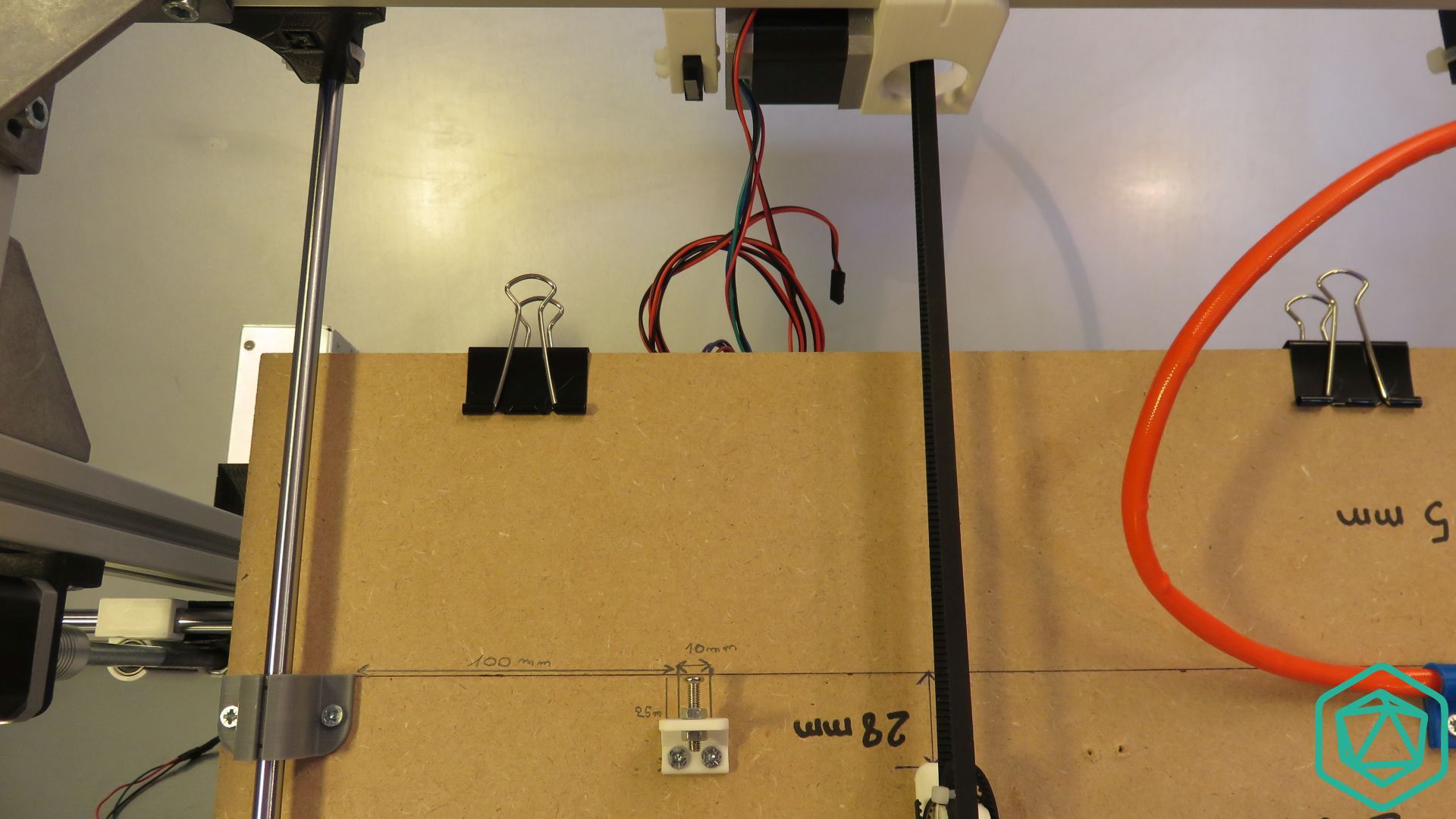 Now take the finger holder and place the 2 wooden screws to secure it in place at the location of the previous marks.

A M3X20mm screw and 2 nuts are to be used in order to adjust the Y MIN position of the heat bed.